If you’re an anime convention goer like us then you’re well-familiar with all the fun stuff that happens while you’re there. From cosplay to anime voice actors there’s never a dull moment for you and your otaku friends while attending a con. However the really fun part doesn’t happen until after the sun goes down, and that my friends, is the rave party!

Rave parties have been going on since the 90’s, of course back then it was more about the well-known party drug called ecstasy (or Molly), and less about the music (though both went hand in hand). Lucky for us we don’t have to worry about a wall of police coming in and shutting down these con raves, cuz’ there are no drugs at them. (At least not the ones we’ve been too, just kidding, they’re all clean! ^.^)

Whenever you head down to any anime con’s rave party, you’re bound to find these five things while there. We of course have been to enough raves to know what goes down, so for you first time ravers here’s what you’ll be in for! 😉 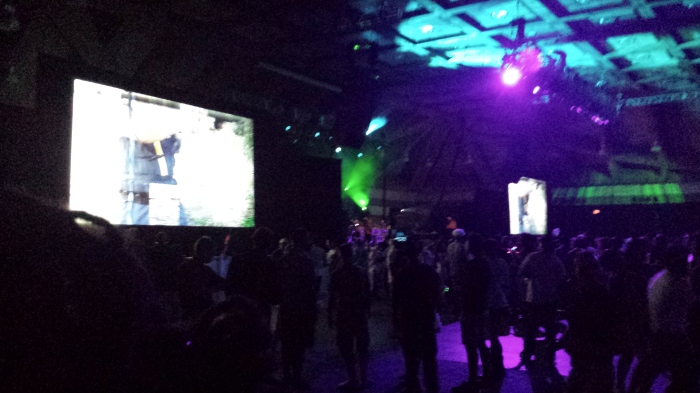 These are almost like an industry standard when it comes to raves. Have you ever been to a rave party (con-related or not) that has never had a dance circle? If the answer is no, then c’mon, you gotta get out more! Dance circles usually contain one to three people that are either b-boys (or b-girls), pop-lockers, or dancers that like to do neat tricks with their rave party spinners and trinkets. If you ever find yourself at a rave, then this will probably be the first thing you’ll notice.

Both A. Goldman and Yours Truly have been in many of these at raves and they’re pretty fun! Because of how dark it can get inside a rave its hard to tell when the conga line starts, but somehow we all know how it ends; when it crashes into the dance circle. There are still a handful of anime convention rave parties that still do this, so if you find yourself in one, go ahead and enjoy the ride! 😉

Depending where you are while inside the rave, you’re bound to find at least one or two grinding couples out there on the dance floor. Can you imagine dancing to your favorite nightcore trap remix of the opening theme to SAO, before glancing at the cosplayer dressed as Shiro (from Deadman Wonderland) bumping and grinding nastily with Scorpion? That would be odd and exciting to watch, wouldn’t it?

We’ll admit, both A. Goldman and Yours Truly (mostly Yours Truly) had a hand in the bumping and grinding game when it came to raves. Unlike actual clubs though, you’ll only find these particular couples either somewhere off to the side away from the crowd, or way in the back. Either way, you’re bound to find them at these parties.

Wanna know how that dude got those light-up bass EQ sunglasses? Then you’re gonna wanna check out the merchandise table at the rave party! Be sure to have some cash with you (say about $20-40) if you plan to buy anything at that table, cuz’ chances are, 75% or everything on that table is gonna cost at least $25.

It can’t get any more simpler than that! 🙂

So there you have it! The five things you’ll find if you ever head off to a rave party at an anime convention. Number three might be a little more common if you find yourself at a cosplay after party at a nightclub/lounge, so don’t be surprised if you see a Sailor Venus cosplayer giving Deadpool a lap dance. Trust us, we’ve seen it happen.

Have fun going to your first con rave!! 🙂