This is the place where we list our samurai (or other sword-wielding) warriors of the week! Every week we pick a male warrior from various samurai anime (hero or villain), and induct him in our Samurai Hall of Fame!

He is a former member of the Hunter Eight as well as the father of Jenbei Tsukishima. He was supposed to join up with the Mushibugyo but was unable to because of his broken leg, which he sacrificed during his time with the Hunter Eight. He is a master sowrdsman who has hand-crafted his own style which he passed down to his son, and has also created 36 secret techniques all his own. Aside from that and his willingness to fight, those are just a couple of the reasons why we’ve made the decision to induct him in our Hall of Fame. (06/10/17)

Nanashi is the main character in the samurai anime title Sword of the Stranger. He is a nameless ronin who vowed to keep his sword sheathed until he met up with a young orphan named Kotaro and his dog Tobimaru. The reason for keeping his katana sheathed was because of the fact that he was ordered to execute two children of a rival lord. However when Kotaru gets kidnapped by the Ming clan, Nanashi finally unsheathes his sword and travels for miles to save him. (06/03/17) 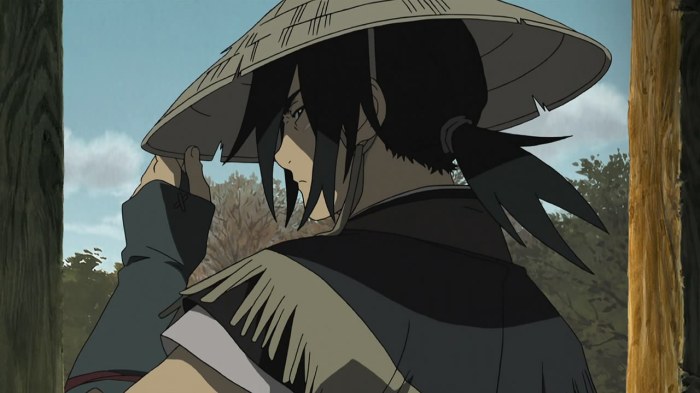 Also known as the Eternal Assassin, Akizuki Yojiro carries the sword known as “Getsuruito” and plans to use it to kill the Hasha no Kubi. (or Head of the Conquer.) His skills as a samurai are second to none; which has led him to become a bodyguard to a traveling theater group known as Yuyama Troupe, who’s out for vengeance because the leader’s parents were killed. Yojiro will do whatever it takes to protect the ones that he care about, which is why we inducted him into our Samurai Hall of Fame! (05/27/17) 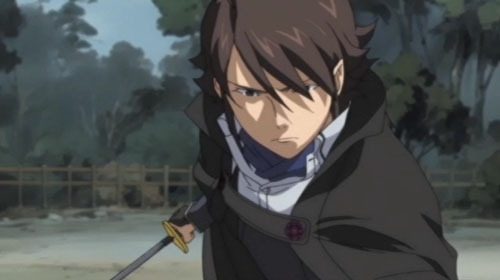 A skilled samurai who is one of the main characters in the anime title known as Hakuouki Shinsengumi. Okita is the captain of the first division and has a charming and somewhat sadistic persona, although he’s actually quite a good-natured individual, though you’d never know it due to his rudeness and teasing. In spite of this he does everything in his power to protect the ones that matter to him, and that is what makes him a great candidate for our Samurai Hall of Fame! (05/06/17)

A rather loyal character to Hijikata as well as a sword aficionado, Saitou comes across as the quiet-yet-powerful type that’s a bit aloof when it comes to women. Even though he can only use a sword with his left hand, Saitou is a rather skilled samurai who uses his Left-Handed Lai Style. With that kind of skill to be a lefty, it’s no wonder why we’ve chosen him to be our Hall of Fame inductee! (04/22/17)

Hiko is a mighty swordsman who is the master and teacher of Kenshin; who is the main protagonist of Rurouni Kenshin. His samurai swordsmanship skills far surpass that of Kenshin himself although the two of them are both equal in speed. He has trained Kenshin into the swordsman that he is today, but his true test will only be complete if he can survive Hiko’s ego! (04/08/17)

A samurai who’s a recurring main antagonist from the well known series Gintama! He is the leader of the Kiheitai and a wanted fugitive, although before all of that he was training to one day become a great samurai. His swordsmanship skills rival that of his rival/enemy Gintoki, and he possesses the qualities of being a great leader. Now we’re just hoping that he one day decides to fight for the other side…(03/25/17) 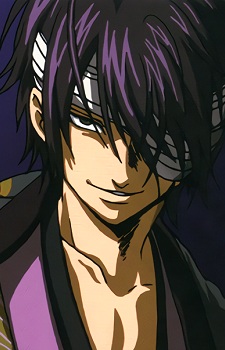 Also known as “God of the Sword” Mifune is a samurai bodyguard who is in charge of protecting the Witch Angela Leon, and is also a teacher at the DWMA (in the anime). He’s a powerful samurai who possesses the skill known as the Infinite One-Sword Style, that he uses against his opponents to overpower them in both offense and defense. A remarkable skill that has now made him our Hall of Fame inductee in our Samurai Hall of Fame! (03/18/17)

To celebrate his return to the airwaves (and Cartoon Network) after a thirteen year hiatus, we’ve decided to induct Samurai Jack as our special Non-Anime Hall of Fame Edo Warrior. Jack represents what is means to be a samurai; through his humbleness, his training, and his credo. He possesses a special katana that was forged from the gods that cut down entities that are impure and wicked; something that Aku hates. Jack shows true courage through hard trials and in overcoming difficult obstacles, which is one of the reasons why he’s on our Samurai Hall of Fame list. (03/11/17)

A samurai with a heart of compassion, justice, and bravery! Jinbei is the main character in the series Mushibugyo who is a skilled samurai that’s in charge of protecting the Edo village from the giant insects and bugs that plague it. No matter how big or dangerous the fight is, Jinbei meets the challenge with courage in his eyes and his katana by his side! (02/25/17) 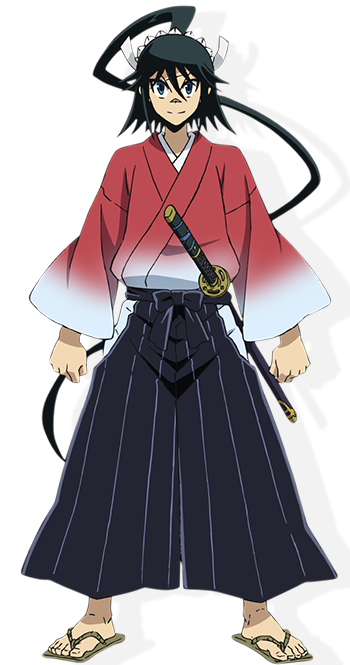 The main male protagonist of Hyakka Ryoran who serves as the general to a Master Samurai. He’s a firm believer in the samurai code and follows it to the fullest extent, plus he serves as the general for Jubei, Sanada, Hanzo, Matabei, and the others. Trained in his skills as a samurai Muneakira has made his name in our Samurai Hall of Fame. (01/28/17) 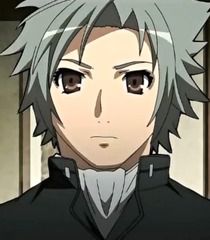 One of the swordsmen who possesses the deviant blades, Ginkaku lives in the Genkoku Castle located in the desert of Inaba. Despite his depressing demeanor he’s quite skilled in swordsmanship, as his blade of choice is the one that has been handed down to him by his family, his Namakura. (01/07/17)

The Demon of the Hidden Mist and the first villain that Naruto and the rest of Squad 7 ever face! He carries the Decapitating Knife Sword that’s about as tall as he is, and knows how to use it. (Seriously, that thing weighs at least 40-50 lbs!) As one of the Seven Swordsmen of the Mist, Zabuza has become somewhat of a fan favorite among many Naruto fans (right alongside Kisame, of course). With that in mind, it’s just one of the reasons why we’ve inducted him into our Samurai Hall of Fame! (12/17/16)

Jin is a skilled (yet calm) samurai who travels with Mugen and Fuu in order to help them look for the samurai, who smells like sunflowers. His fighting style follows the code of traditional methods as seen with many of the samurai from the Edo, and Sengoku periods. When it comes to sword fights he’s not one to cower in the face of his fiercest enemies, which is why he’s our inductee for this week’s Samurai Hall of Fame! (12/10/16) 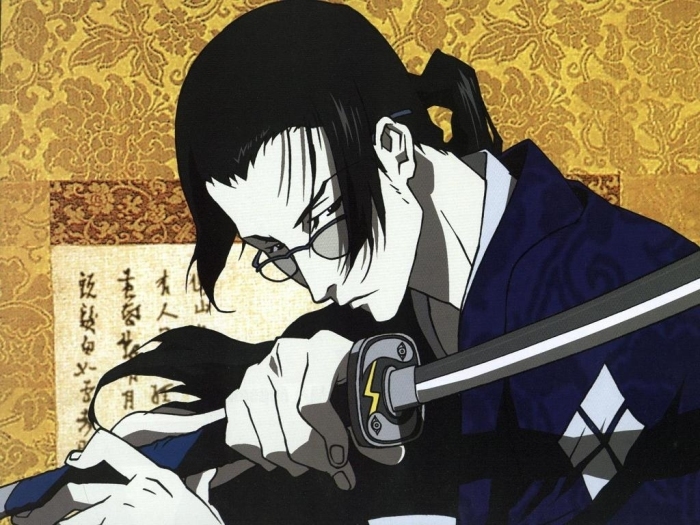 If you’re a One Piece fan, then you know without a doubt that Zoro is a sword-swinging badass! As a member of Luffy’s pirate gang he was once saved from his execution on the Marine Base way back in the first season. This “Straw Hat” can wield three blades like nobody’s business which makes him a Samurai Pirate God! We’re happy to announce that he’s tonight’s Samurai Hall of Fame inductee! (11/26/16)

If there’s one word we can say about this guy, is creepy. Even though he may creep many people out Hyouei is very calm when in the face of battle. He never really says anything or talks much, but one thing’s for sure; if you’re ever in need of a servant samurai bodyguard, then Hyouei’s your guy! (11/19/16)

A samurai brotha from another motha. This anti-samurai-hero wears the Number 2 headband while looking for the Number 1 person that killed his father. Afro is a skilled samurai “demon” who possesses skills that could rival that of Hattori Hanzo; if he was still alive today that is. If you’re a ronin or swordsman who happens to bump into this guy in a dark alley, you’d best be ready to fight or get chopped in the process! (11/12/16)

Kenshin represents the very fabric of what it means to be a true samurai warrior; His skills in swordsmanship far surpass that of your average samurai, as he has shown that he has mastered a particular style known as the Flying Heaven Honorable Sword Style. Although his skills are deemed to be lethal, Kenshin modifies them in order to fulfill his vow as an honorable samurai not to kill in battle. It’s honor like that that makes him an Edo Warrior, and an inductee in our Samurai Hall of Fame. (11/05/16)

One thought on “Samurai Hall of Fame: Edo’s Warriors”

Hey guys! I know you probably don't see me a lot, but I'm the other half of D&A; D.J. Lewis! Things have been kinda crazy, but A. Goldman and I plan on doing more live vids as well as launch our Nerdz of the Decade podcast! ;) #anime #manga #에니메이션 #코스프레 #셀스타그램
Miku Desktop wallpaper/lock screen if you're wondering no this is not something we downloaded this was created from a screenshot.🥰💕💖❤️😎🤘😎👍👊😊😊😊. #에니메이션 #코스프레 #셀스타그램
Me and my cats .💖🐱 #valentineday #catphoto #에니메이션 #코스프레 #셀스타그램
We can't wait shout out to all major companies working on the show including #rightstuffanime #crunchyroll and anybody else who is currently working on this show all of the artists and everyone else thanks this show has been amazing we can't wait to see where it goes next.😎👍😊😉 #에니메이션 #코스프레 #셀스타그램
Hey guys if you're wondering about our podcast we finally have a name thank you to everybody that voted on the different names the end result was this and this is what one so keep it locked right here and you should eventually be able to tune in to our podcast once we get things up and running😎✌️#popculture #nerdstuff #에니메이션 #코스프레 #셀스타그램
We're so happy that they scored so high on the top 20 anime list One of our favorite shows and a great anime to check out 😎✌️👍 PS this is from high dive and there list of the top 20 anime we did not write this please give all credit to original writer and creator thank you 🙏✌️#crunchyroll #DanMachi #에니메이션 #코스프레 #셀스타그램