So we’ve reached the second weekend of the new year, and by now we’re pretty sure that you’ve gone to at least one or two anime conventions by now. Hopefully last year was a blast for many of you guys and gals who’ve gotten the chance to showcase that cosplay outfit that you’ve been working so hard on for the last six months. The Winter weather may be a bit crazy right now, but it’s a good thing that convention season is year-round. If your New Years Resolution is to cosplay at an anime convention, or perhaps even go to one for your very first time, don’t hesitate to check out some of the cons that we’ve got listed on our Cons Near U drop-down page. 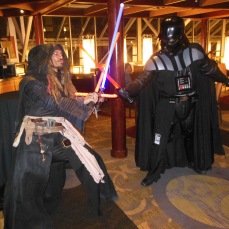 Our home base anime convention Animore is less than a week away, as we’ll be making our third appearance there! The convention tour that we did for 2017 was pretty awesome – despite a couple of ‘hiccups’ along the way. This time around for 2018 we’re taking a more direct approach with our fanbase by submitting Q&A and other fan panels to anime conventions, so that you guys can not only see us in action, but to also give you a chance to know us on a personal level too. (i.e. our favorite food, what kind of girls we like, etc.) We’re also hoping that this time around we get to go to an anime convention…in Canada. To all of our Canadian anibloggers who have seen and read our blog, we thank you so much for helping inch a little closer to our ultimate goal each day. (And we’re hoping we get the chance to go to a convention out there this year, or next year!)

If you’re in need of any tips on cosplay as well as how to plan for an anime convention this new year, just click on this link for convention tips, and this one for cosplay. We’re so excited to see what 2018 has in store for us on the D&A front, so start saving up and working hard on your cosplay now, because before you know it Spring and Summer will be here, and when that happens con season will be in full throttle! We guarantee it! 😉