Every five to ten years an anime title comes along that is so random, so unpredictable, and so ‘far out’, that the title itself almost doesn’t even seem to fit in the same category as it’s anime brother and sister titles. When Panty & Stocking with Garterbelt made its way to the U.S. it took everything we loved about late 90’s western animation, and dropped it on its head with sex jokes, hilarious parodies, and adult animation. Now in 2018 we have a new obsession in the form of two fourteen year old girls with cute faces, and supposedly foul mouths. JoJo is not the only one who has bizarre adventures, so say hello to Popuko and Pipimi of Pop Team Epic, as we discover what makes this show so epic! 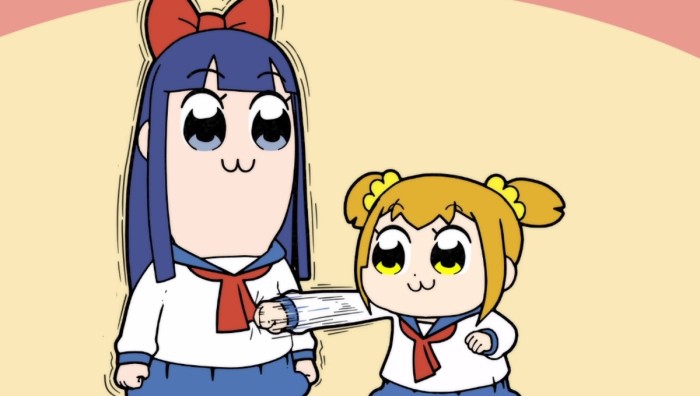 Before it became an anime series, Pop Team Epic was a four panel surreal-humor webcomic and manga created by Bkub Okawa. The story itself follows the lives of two girls named Popuko and Pipimi, as they find themselves in hilariously bizarre and mundane situations, and pretty much react to them in the same way. This series (including the manga and digital webcomic) has been met with rather high praise from both Japanese and Western audiences for its over-the-top randomness, surreal humor, absurdity, and everything else. But what is it about this show that makes it so epic?

There are many theories that surround this question as to why this series is so epic in its own ways. As for us on the D&A front, we have our own.

Comedic timing is so important when it comes to comedies of any kind. As a writer and a producer you have to know when to hit em’ in the gut with a laugh, and how hard to hit em’. Pop Team Epic has that ‘I-dunno-what-the-hell-I’m-watching-but-it’s-funny’ type of comedy to it. Add in the surreal and bizarre element to this type of comedy, and you’ve got a recipe for some bizarrely epic laughs!

We know a lot of anime characters with Multiple Personality Syndrome (MPS), but when it comes to Pop Team Epic just having one voice actor for Popuko and Pipimi won’t cut it! Both girls have an almost combined 32 different voice actors between them, which is 16 for Popuko and 16 for Pipimi. If you ever wanted to hear what Todd Haberkorn or Chris Sabat’s voice sounds like coming out of a girl, then this is the show for you!

The last time we saw this format was back when Panty & Stocking was dubbed. Each episode of Pop Team Epic is divided into two 15-minute segments having different voice actors for each of the girls. With a show like this you won’t get just one style of animation, you’ll get multiple styles such as a CGI-type of style, 2D animation, and other styles that you may or may not be familiar with.

There’s more to this series than meets the eye; like the fact that not only does this series do pop culture parodies, but does parodies from other anime and video games as well (i.e. Call of Duty and Pokemon). There’s really no full-fledged story plot for a series like this, only because with all the craziness surrounding it, there’s really no need for one.

You can find this series on Crunchyroll, so if you’re looking for something bizarrely and humorously epic, then check out Pop Team Epic!