Hey there guys n’ gals! We’re back with another filler post that highlights new anime title releases from Crunchyroll, and boy do we have a good one. For those of you who are fans of both the Gundam and Evangelion series, this title may be right up your alley. For our Crunchyroll spotlight we’re highlighting the anime title, Darling in the FRANXX… 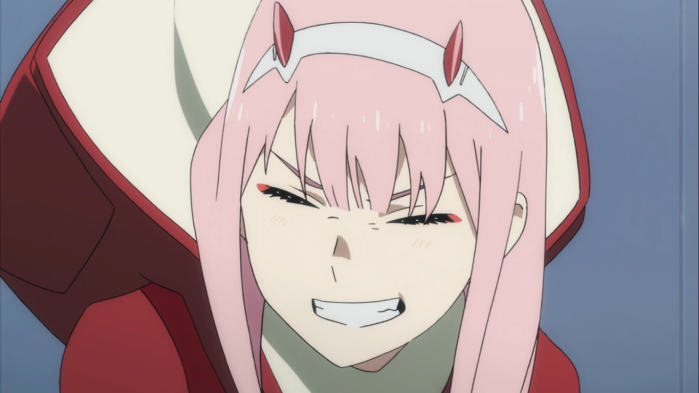 Taking place in a post-apocalyptic future where humanity becomes an endangered species by giant beasts called Klaxosaurs, the remaining members of the human race create a military city named Plantation, where children are partnered up in boy-girl pairs named Parasites and pilot giant mecha called Franxx (hence the name).

One of the boys, Hiro, is viewed as a prodigy, however after failing one of his tests, the emotional stress that befalls him, leaves him unable to pilot a Franxx. That is…until he meets an infamous human Franxx pilot with Klaxosaur blood named Zero Two, who is a member of an infamous race of humans with said blood. (Don’t forget about the red horns on her head.) After her last partner was killed in a Klaxosaur attack, Zero Two convinces Hiro to become her partner (darling).

The series itself (as A. Goldman would put it) kind of has that Evangelion-esque feel to it, mixed with some elements from the Gundam series. However the plot itself is totally different, as Zero Two’s character is a bit mysterious to say the least. If you’re looking for some new sci-fi/mecha anime to check out for 2018, then head on over to Crunchyroll’s streaming website and check out Darling in the FRANXX! 🙂