Skip to content
HomeSpinning Wheels: 5 Reasons Why You Should DJ an Anime Convention!

Anime conventions in this day and age are a part of the otaku sub-culture in the U.S. and around the world. Although they may differ in size, activities, and tastes, there’s a little something for everybody who is attending. For manga enthusiasts there’s the Manga Library, and for convention goes (like us) there’s Q&A panels, workshops, and late night raves. Out of all the fans that go to various cons within North America and other countries, there’s only a handful of them who happen to be DJs, Producers, or both. If you happen to be a DJ/Producer who’s on the hunt for that first gig, and you also happen to be a bit of an anime fan, it wouldn’t hurt to take a shot on the decks at an anime con’s rave or afterparty (if you’re up for it). For this filler post we’ve got five reasons why DJing at an anime convention’s rave party is different – and why you should take a shot at it! 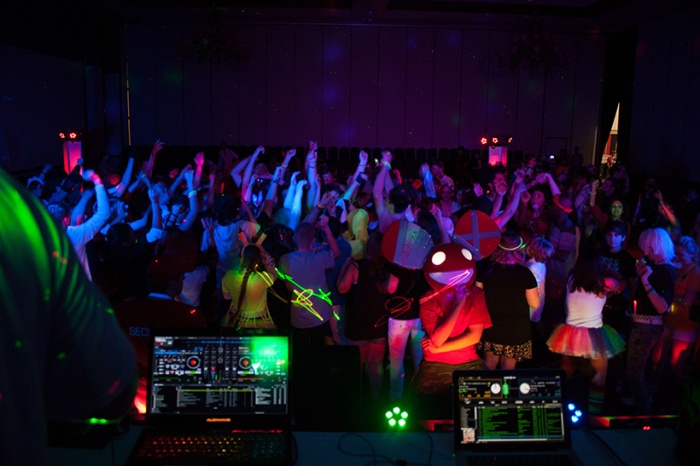 At regular nightclubs (depending on which ones you go to) your musical selections are a little bit restricted to say Top 40, Hip-Hop, and a few other genres. We’re not saying that its a bad thing, but breaking out a Skrillex track in a Hip-Hop club or a country tune in an EDM club, won’t exactly land you a second appearance at said club. Anime Convention rave parties are different; sure they like a LOT of EDM and Video Game Remixes, but you can also get away with some Top 40 tracks – and you got to have the Wobble or the Cupid Shuffle somewhere in your arsenal!

No nightclub brawls! Pretty much everyone there is pretty nice. Watch out for creepers though.

4. Some Cons Actually Pay You

This one depends on the convention as well as what benefits DJs receive through their contracts. We know most mid/large cons offer their musical guests free weekend membership passes, hotel stay, food, and some form of payment for their services. (Although that’s between the DJ and the convention staff.)

5. You Get To Promote Yourself

Every single DJ who has spun at a con’s rave party, either had business cards or demo tapes and sometimes both! You should never spin at a club and not market yourself; that’s how you GET gigs! If the con goers what to find out who the DJ was that played that awesome set for their anime convention, make sure you give them a card with your website and social media handles.

So there you have it! If these five reasons won’t convince you to spin at an anime convention (if you’re a DJ/Producer or just a DJ), nothing will!