Welcome back guys! We’re now on the fourth episode of our Anime REvisited pick; Chivalry of a Failed Knight. Things are about to get a bit more interesting from here on out, so without further delay, let’s get on with the review! 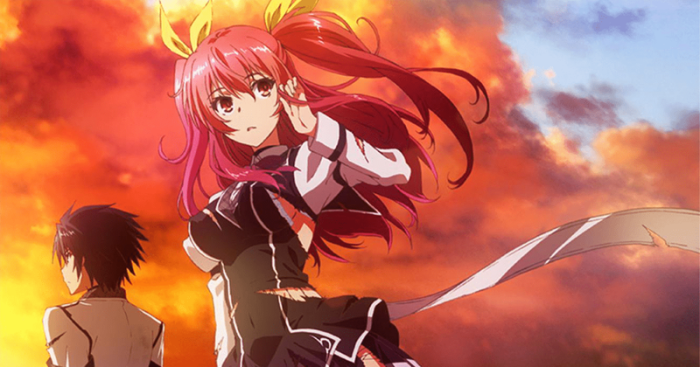 The qualifying rounds for the Seven Star Sword Art festival have now begun, as Stella faces her first opponent at the beginning of the episode – only for them to concede 30 seconds later. Later on Ikki is back at the dorm room while watching footage of Kirihara’s previous battle; where his Blazer allows him to hide himself as well as his projectiles, while he aims them at his opponents causing damage in the process. Stella looks at the footage and is disgusted by the way Kirihara fights, but deep down inside…Ikki was actually a little bit nervous about his match with him. After talking with Alice outside by the school water fountain, Ikki discovers that he’s taken a lot of abuse growing up – to the point where he can’t even tell when he’s mentally about to reach his breaking point. (And perhaps it might even affect the outcome of his match.)

By the middle of the episode the match between Ikki and Kirihara was about to begin. Kirihara used his Blazer’s technique to cover the stage in a forest of green in order to conceal himself and his weapon, while Ikki summoned his blade. During the battle it seemed like Ikki had a good idea of how Kirihara’s attack pattern works, that is until he made his projectiles invisible as well. Stella could only watch in horror as Ikki was getting shot by the arrows coming from Kirihara’s bow, and once things went further south, Kirihara chanted to the crowd in calling Ikki the “worst one”.

Officially pissed off Stella raised her voice to the sky and demanded that Ikki man up and take down Kirihara, to which Ikki did just that as he developed a new technique called “Perfect Vision”; which allows him to see everything Kirihara can throw at him. In the span of 2 minutes of episode time, Ikki took down all of Kirihara’s attacks and came gunning for the coward before he conceded defeat; as the sharp part of Ikki’s blade scratched his nose. Automatically everyone in the stands cheered him on after winning, though Ikki quickly collapsed afterwards.

Near the end of the episode Stella was by Ikki’s bedside while he recovered from his wounds. The two of them share a rather touching moment, but they also made a promise that they would meet each other at the Seven Star Sword Art Festival. Thus, this is where the episode and our review on the episode will end. Ikki won the battle against his cowardly obstacle of an opponent, but could there be more obstacles that he’ll have to overcome in the coming episodes? I guess we’ll find out next time!