Hey guys n’ gals, just a quick little update announcement about our two new crossover fanfiction titles. We’ve changed up the illustration as well as the plotlines for each title, and even added a few original characters to the cast. The new names of our titles is Sonic Beatdown: Danganronpa Silver, and Panty & Stocking with Sonic & Knuckles!

Sonic Beatdown: Danganronpa Silver, is a crossover fanfiction title between the Sonic the Hedgehog and Danganronpa franchises. It is also the first of four multi-crossover titles under the Sonic Beatdown fanfiction series. The setting takes place in an MMOARPG (Massive Multiplayer Online Action Role Playing Game) reality, after a cosmic event called “The Great Shift” happened over 1,000 years ago. Chapters in each of the four titles are told in first-person POV by several members of the main cast.

Over 1,000 years ago, a cosmic event known as “The Great Shift” caused all of time and space, and even reality, to play out like an MMOARPG game. 70% of Earth’s population became normal NPCs (Non-Playable Characters) with normal lives, while the other 30% of the population became fighters and battlers against monsters, leveling up their stats, collecting loot and items, and more.

In 2190, more than 80% of Earth’s population has been robotized by Eggman Nega in order to create his android army. Silver has been chasing down his arch-nemesis for many years, and has finally located his base. The psychic hedgehog infiltrates the Giga Maze Fortress; Eggman Nega’s HQ, and battles against a small army of robotized humans that were once citizens. He finds the evil scientist in the control room as Silver was prepared to put a stop to all of Nega’s madness once and for all. After a semi-lengthy battle Silver comes out on top, however Eggman Nega had one more trick up his sleeve. What Silver didn’t realize was that the battlefield they were fighting on, was the platform for Eggman Nega’s newest invention; The A.R.T. Machine (aka, The Alternate Reality Transporter Machine).

After flipping the switch Silver was blinded by a white light as he felt his body being transported to another world; molecule by molecule. Upon coming to the hedgehog found himself in a new city called Towa City, however the state of the city was in more peril than his own future. In the wake of the events of The Tragedy 50% of the population has been infected with ‘Despair Disease’, by the video that Junko Enoshima created. She and her sister Mukuro are the main trigger behind the uprising at Hope’s Peak Academy, as well as all of the tragic events that followed suit. Silver wanted to return to his time and defeat Eggman Nega and foil his plans once and for all, but after seeing the horrors of what the remaining people of Towa City are going through, he vows to help end their despair at the hands of the Despair Sisters. He won’t be going at it alone however; as Blaze and Shadow (who works for the G.U.N. Subdivision of Towa City) join up with him to battle against diseased victims, level up their stats, and defeat Junko Enoshima and her twin sister Mukuro. Will hope be on their side? Or will despair cripple their hopeful efforts…?

Panty & Stocking with Sonic & Knuckles, is a crossover fanfiction title between Sonic the Hedgehog and PSG. It is the second of four multi-crossover titles in the Sonic Beatdown fanfiction series. This title bears no connection to its predecessor fanfic; Sonic Beatdown: Danganronpa Silver, but it does take place in the same MMOARPG reality that was caused by “The Great Shift”. The chapters of course are told in first-person POV by members of the main cast.

This story is divided into two acts (two story arcs). Act One is a retelling of the first season of Panty & Stocking with Garterbelt, only with a few small changes. Act Two is an original story centered around Stocking Anarchy and Sonic the Hedgehog entitled Lovers of Despair. In both acts Sonic and Knuckles team up with the Anarchy Sisters to battle ghosts and demons, level up, and prove that they’re the baddest Mofo’s on the planet! 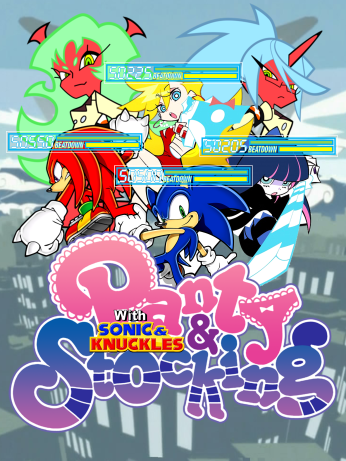