Ice cream, chocolate cake, strawberry sundaes…those are the kind of sweet treats that are no fun to eat alone. Love and dessert almost go together like salt and pepper (the condiments not the female rappers, though we love them too), PB and J, and anything else that might make a great combo! Of course for your Monday night treat my friends, we’re giving you more than just something sweet to snack on with your significant other. We’re giving you some lesser known anime titles to enjoy as well! 😉

If you’re looking for an anime title about love, rejection, and acceptance, then you’re gonna want to check out this lesser-known title called ef: A Tale of Memories. It tells the story about a boy named Hiro who comes across a girl named Miyako, who borrows his bike in order to catch a purse snatcher during Christmas Eve. After crashing his bike Miyako and Hiro end up spending their Christmas Eve together, and soon discover that the two of them are actually in the same class, much to the dismay of Hiro’s childhood friend Kei (who secretly likes him). There’s more to the story than what we just told you, so check it out and stream it on Crunchyroll, or any anime streaming site that’s legal and has permission to post it.

If you’re on the hunt for something delicious, then might we recommend the snack known as Mont Blanc. This chestnut pureed snack can be found in not just Japan, but also places like Hong Kong, Romania, Italy, and Spain. If you ever find yourself heading towards those places, be sure to ask for this particular snack! 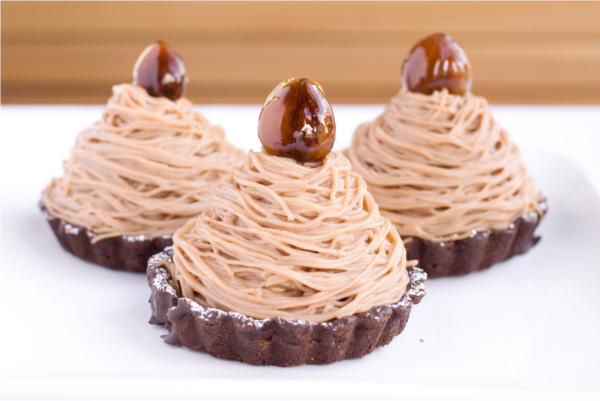 We’ll have some more awesome filler posts coming later this week, as well as new updates on the remainder of our anime convention tour. Plus, new developments regarding the future of D&A, and what our plans are for the years ahead. That’s all coming next time on D&A Anime Blog! It’s a part of you! 🙂