It seems just like yesterday that anime was coming up in the U.S. from the Land of the Rising Sun, now it’s 2018 and globally popular all over the world. From VHS cassette tapes to DVD and Blu-Ray discs, anime has become more than just a trend, it is a subculture that almost serves as a second religion – almost. With the rise of anime came the rise of special sanctuaries where hundreds of thousands of anime brethren gather to talk about their favorite shows, characters, scenes, and voice actors. During the late 90’s the anime convention scene was in its infancy stages; where anime clubs would pull their resources together to create a place for others who share their interest in anime.

Also during this time, an anime convention that would soon become one of the largest conventions on the east coast started out in Pennsylvania. Otakon came about right around the time the 90’s boom for anime was happening, of course it wasn’t until 1999 that this small little anime convention, was going to unleash Baltimore’s nerdy side ten-fold! This would also introduce Baltimore, MD to something new that it’s never seen before; cosplay. 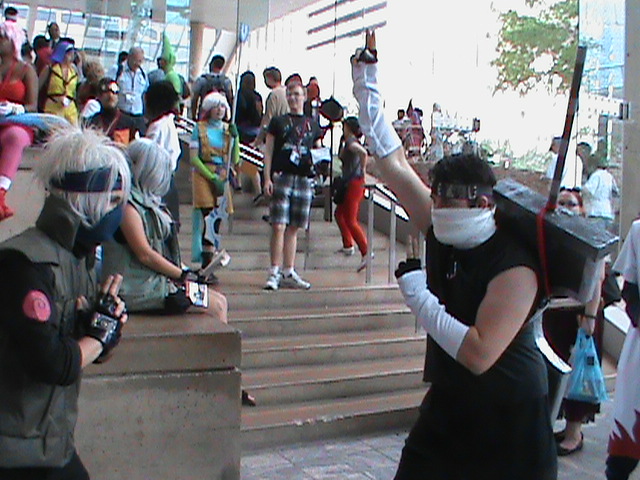 For sixteen years anime fans from all over the Baltimore metro area and beyond gathered at the BCC (Baltimore Convention Center) every July/August for crazy shenanigans, dance circles at rave parties, and just nerds being nerds! A. Goldman and myself (D.J. Lewis) have had the pleasure of seeing all that Otakon had to offer us in our journey to become what we are today; the founders of D&A Anime Blog. While we never really admitted it Otakon played a small part in who we became after its departure for D.C. in 2016. There are a lot of fond memories about this convention that will truly be missed; from the ‘Ice-Cold Water Guy’ to seeing just a plethora of hardcore fans just waiting to get inside from the hot July heat. Well…maybe not that last part.

Before Otakon packed up and left for the other side of I-95, Baltimore went through a dark point in time. When the riots took place during the death of Freddie Grey back in 2015, it did put a slight dent in attendance for Otakon that year. Once the announcement was made during Otakon 2016 that it was moving to D.C. the very next year, many fans had mixed feelings about it – even us. Otakon was our Home-Base anime convention where we could meet up with fellow fans and geek out, but we’ll admit, it did hurt just a little to see it leave.

So that brings us to how we came into contact with a new, but small-scale anime convention called Animore. It made its debut back in January of 2016, the very same year that Otakon was leaving. For those of you that have never been to Animore, the atmosphere is like anime conventions of old; that late 90’s laid-back morale that you’d find back when DBZ, Sailor Moon, and Studio Ghibli ran things in the anime world. You don’t have to worry about waiting in the hot sun to go in, because the convention is in a hotel – a four star one might we add.

There’s awesome vendors, great staff, and things for fans and gamers to do. While it may not be as hyped up and turned up as Otakon once was, Animore does throw some awesome dance/rave parties that bring back a little of that ‘Otakurave’ feeling. Because of its laid-back atmosphere you’ll get one-on-one encounters with some of your favorite voice actors and web artists.

Even though it’s only been around for three years Animore has treated us like family; so much so that we’re only one step away from being its ‘ambassadors’. We believe the homely feel that this convention brings will spark the rise of other small anime conventions that may want to make the move to Baltimore. Although Otakon left a giant hole in Baltimore’s special interest department, we’re hoping that more small laid-back anime conventions like Animore will make their move here, and put Baltimore (aka Charm City) back on the map in the anime convention category.

One can only hope that this will happen, but we’re gonna need more than the dragon balls to make this wish come true.

You can register and check out this awesome convention at https://animore.com